As I was shopping in Home Goods the other day, you can always find me in the kitchen goodies section, I happened upon this deep Lodge cast iron pan. You can find it here! OMG! Fluffy Cinnamon Rolls and homemade biscuits came to mind. However, I knew I would need some help with a recipe. So, I logged onto Pinterest to see if I could find an amazing one for Cinnamon Rolls. See, I am not much of a baker. Baking is a bit too exact for me. Luckily, I found this recipe from Baker by Nature. With just a few of my own tweaks, I must admit they were fabulous. More than fabulous. Just may have been one of the best Fluffy Cinnamon Rolls I have ever tasted. So light, and super fluffy!

Just to be clear, this is NOT the quickest, or easiest of recipes. Of course, I had to make it a bit more difficult, given that I kneaded the dough by hand. My electric stand mixer broke a few months ago. Since I do not bake that often, why replace? If I made this recipe again, even with a new mixer, I would still do it by hand. My technique really did produce super Fluffy Cinnamon Rolls. As I go through the steps below, I’ll be sure to let you know what I did differently.

Additionally, see update below on how I turned these Fluffy Cinnamon Rolls into a HUGE cast iron cinnamon roll! Also, I plan on serving these on Christmas morning while I am preparing my Christmas Dinner.

HOW TO MAKE FLUFFY CINNAMON ROLLS

In a saucepan, heat up the milk until you notice tiny bubbles forming. Add in the butter and remove from heat. Allow the butter to fully melt. In a bowl, combine the AP flour, yeast, sugar. Stir to combine. I actually used a whisk. If you are using a stand mixer, you can mix with the dough hook attachment. Add in the egg. Combine. Whisk in the milk/butter mixture. I combined everything nicely with the whisk then turned the dough onto a floured surface and kneaded it for about six minutes. If you are using a stand mixer, see the link above for directions on how long to knead using the dough hook.

I just had the feel for when the dough was properly kneaded. Place dough in lightly oiled bowl. Cover with plastic wrap and allow to double in size. This will take about an hour.

While the dough is rising, in a bowl, melt the butter for the filling. Mix in the remaining ingredients, except for the nuts. The mixture will turn into a paste. The original recipe called for only a cup of light brown sugar. However, I felt the mixture was too wet. So, I added the extra three tablespoons.

After the dough has doubled in size, punch down and place on floured surface. Roll to an even rectangle that measures roughly 12″ x 8″. Spread the entire filling onto the surface of the dough with the back of a spoon. Be sure to get the edges. Sprinkle on the nuts.

PREPARING THE PAN AND BAKING THE FLUFFY CINNAMON ROLLS

This recipe will make twelve small or six large rolls. As in true Charlotte Plate Fashion, I went for the big ones by cutting the roll into three inch segments with a knife

Prepare the cast iron pan (feel free to use any baking pan that will fit) by rubbing the entire surface with butter, then lining the bottom with parchment paper. I read some of the reviews of this recipe and one suggestion was to use parchment. A few who tried the recipe without parchment ended up burning the bottom. Also, I adjusted the temperature from the initial recipe. Instead of baking at 375 degrees, I baked these beauties at 350.

Place the cinnamon rolls (cut side up) in the prepared cast iron pan or baking dish. Be sure to leave a little room in between as they will expand during the rise and bake.

Cover tightly with plastic wrap and allow to rise overnight. The original recipe suggests placing them in the fridge. However, I did not do this. I put them on my counter and in the morning (about 8 hours later), they looked like this!

Preheat the oven to 350 degrees. Bake for about 20 to 22 minutes. You will notice the cinnamon rolls turn fluffy and browned just a bit on the top.

If you are adding bacon, as the rolls are baking, slice up the bacon in little pieces and crisp up. Drain the excess grease on paper towels.

In a bowl, combine all of the ingredients for the icing. The original recipe called for only a third cup of heavy cream. In my opinion, this was definitely not enough. Start with a half cup and keep adding more, as needed. However, be careful that the icing does not get too runny. The consistency should just be perfect enough to spread on the rolls after baking. You will probably not use the entire amount of icing.

When the Fluffy Cinnamon Rolls were done baking, I left them in the pan and spread the icing on top immediately. Garnish with the bacon pieces.

I swear, these were the best Fluffy Cinnamon Rolls I ever tasted. Big shoutout to Baker by Nature for creating the original recipe. Hopefully, you do not mind my tweaks! I promise, you will want to make these again and again. ENJOY!!!

Want a fun way to enjoy these Fluffy Cinnamon Rolls? Make a HUGE one in a cast iron pan. Check out my recipe for this Cast Iron Cinnamon Roll. I changed up the ingredients just a touch. You are going to love. Have your kids help. They will enjoy baking this with you!

I am more than just recipes. I love fashion and style too! Most importantly, I love my Family (my Hubby and my Fur Babies). My Husband (aka my “Kitchen Bitch”) means the world to me. He’s pretty damn cool too. Not only is he one of the nicest guys you will ever meet, he also has had a lengthy career in professional hockey. Not only winning two Stanley Cups with the Pittsburgh Penguins in the early ’90’s, but most recently winning the Calder Cup with the Charlotte Checkers, amongst many other accolades. If you live in Charlotte and play hockey, or have a family member who plays, be sure to contact him. He is known as one of the best skate sharpeners in the world!

Our life has changed dramatically in the past few years with the passing of our two goldendoodles, Vegas and Viva. We were lucky enough to have Vegas for five years (totally wish it was longer). Most recently, losing our Viva to a brain tumor in July of 2020. We welcomed our mini goldendoodle 7, almost seven years ago. We just added the amazing Hazel! Of course, I am always posting tons and tons of photos! Be sure to check out my recipe for Pet Bone Broth! This broth is super rich in nutrients and will provide your pet with a multitude of health benefits! 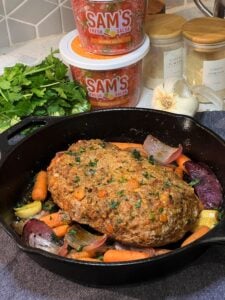 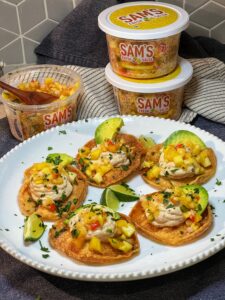 Seriously, we all have a favorite Tuna Salad recipe, right? Have you ever tried blending canned tuna into a smooth mousse? No? 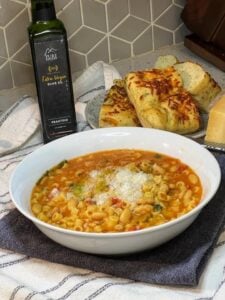 Pasta Fagioli is like a warm, cozy bowl of deliciousness. It’s the ultimate Italian comfort food. This soup-like pasta is loaded with

Comments are closed for this article!