Y’all know my love for clams. I am always trying to think of different ways to prepare them. I recently entered a contest sponsored by Clifty Farm. I was sent a fabulous package of their Country Ham Slices and Country Ham Seasoning Pieces to prepare an appetizer, breakfast and entree. It was only natural for me to pair my favorite gifts from the sea with the ultimate southern staple, country ham. The two combined, created an amazing appetizer that is salty, sweet and savory! You will love this recipe for Clams with Crispy Country Ham and Maple Apple Foam. Be sure to follow Clifty Farm on Facebook and Instagram. Click here for a coupon to try their amazing line of products!

When I think of Country Ham, I think of breakfast…what better way to top off these fabulous clams and crispy country ham, than with a touch of Maple Apple Foam. Sound complicated? Not in the least! For this recipe, I used the seasoned country ham pieces…diced up and crisped in my favorite Lodge Cast Iron pan!

Local to Charlotte, be sure to grab your super fresh clams at The Carolina Meat & Fish Co. I used an immersion blender to create the foam. I am thinking about adding this whipped cream dispenser to my array of kitchen tools…how fun will this be to use in creating more tasty foams?

Heat up the olive oil in a cast iron pan. Add in the diced country ham and allow to crisp up. As the ham is getting crispy, soak your clams in a bowl of water and touch of flour for about five minutes. The clams will ingest the water and release it along with any dirt. Rinse and reserve.

You can also prepare the Maple Apple Foam as the country ham is browning. In a deep bowl, add in all of the ingredients for the foam. With an immersion blender, blend well. Taste to see if you need to add a bit more kosher salt and/or maple syrup. Keeping in mind the country ham will provide an incredible salty flavor to the finished dish. Reserve. You will blend once again just before plating.

Once the country ham is super crispy, remove from pan and allow to drain the excess grease on paper towels. In the same cast iron pan, melt the butter on medium heat. Scrape any of the beautiful browned bits from the bottom of the pan. Turn up the heat and add in the white wine or clam juice. If you desire, add in a few dashes of crushed red pepper flakes. Heat to a fast simmer. Add in the clams…cover and allow the clams to steam open. As each clam opens, remove from pan and reserve in a bowl.

To plate, grab a large plate or bowl, tear off a few of the top shells of the clams…leave some of them connected and fully opened. Layer each clam and some of the shells with a few pieces of the yummy, crispy Clifty Farm Country Ham. Grab your immersion blender and once again, immerse in the maple apple mixture. This time, only submerge half of the blender…tilt the blade in the bowl and turn on…the action of the blade will cause the mixture to foam on the sides. Spoon a bit of the maple apple foam on top of the clams and on the plate/bowl. Garnish with a few more pieces of the country ham and fresh chopped parsley! Serve and ENJOY!

UPDATE: I won the grand prize, not only for this recipe for my Clams with Crispy Country Ham, but also for Pasta Carbonara with Country Ham and Quail Eggs and my Eggs Benedict with Candied Country Ham. 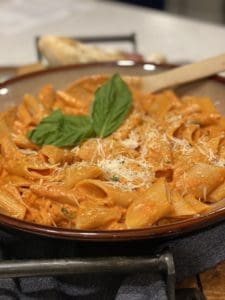 Can you even believe this was my very first attempt at making Penne Alla Vodka? Of course, I had to do a 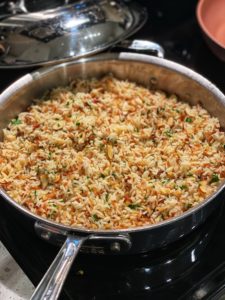 Ditch the box of “San Francisco Treat!” Let’s make homemade Almond Rice Pilaf. If you have an aversion to nuts, leave them 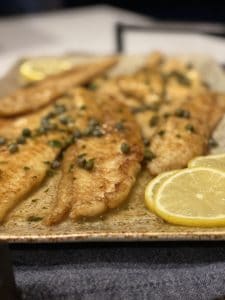 Honestly, I never thought I would be a blogger who went on an on with a story about how a certain dish