All I can say is, WOW! I have been living in the South for a little over seven years and have yet to try Shrimp and Grits. So, when The Carolina Meat & Fish Co. started stocking these grits from Geechie Boy Mill, I just had to try and create a recipe!

I have to say, I enjoyed the texture of the stone-ground grits very much. If you are local to Charlotte, head on over to the market and grab a pound of super fresh North Carolina Shrimp and a bag of these amazing grits and let’s get cooking!

Heat up a cast iron pan. Add in your bacon and allow to crisp up. As your bacon is frying, in a bag or bowl, add your shrimp. Season with the Old Bay, Cajun Seasoning, paprika, salt and pepper. Set aside.

Bring the chicken stock to a boil. Add in your grits, butter, heavy whipping cream and salt. Stir.

Allow to come back to a boil, reduce heat and cover. Stir often. It will take at least 20-25 minutes for the grits to finish. Once the bacon is fully crisp, remove from pan and reserve a few tablespoons of the bacon fat to prepare the shrimp.

When the grits are the perfect consistency, stir in the cheddar cheese and cream cheese. Taste to make sure there is enough salt. You can also add another touch of cream, if needed.

In the cast iron pan with the bacon fat, sear your shrimp. This will only take a few minutes. Do not overcook your shrimp.

Transfer the grits to a large bowl. Top with the shrimp, bacon pieces and fresh parsley. Serve immediately. I also added in a few touches of the bacon fat from the pan where I cooked the shrimp!

Want to try this recipe as an appetizer or for a party? Plate the shrimp and grits on individual cast iron mini pans like this!

Now that I am a southern, I have been having a ton of fun cooking up southern food. Here are a few other recipes that may interest you! 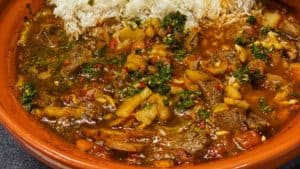 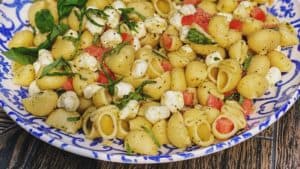